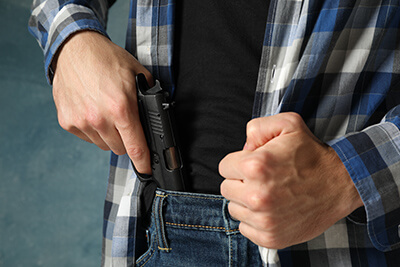 While Nevada is classified as an open carry state, there are restrictions to have a concealed weapon. For the most part, there are no restrictions about purchasing, owning, or possessing a gun, but there are certain rules regarding carrying a concealed weapon. This includes requiring a permit to carry a firearm in such a manner as to be unnoticeable, such as under clothing, in a purse, etc. Carrying such a weapon without the proper permit can result in a felony charge, and Nevada’s laws regarding the possession and use of firearms pertain not only to local residents but also to visitors and tourists. You will need the services of a Firearms and Weapons Defense Attorney if you have been arrested on Firearms and Weapons charges.Nevada does not prohibit the open carrying of a firearm, but It is illegal to have a loaded shotgun or rifle in a vehicle on public highways. This restriction does not pertain to handguns. There are also several areas where handguns, pistols, rifles, and other firearms are not permitted. These include such areas as child care facilities, public schools including colleges, Veteran Administration buildings, post offices, federal buildings, courtrooms, airports, etc. Weapons can be carried into some of these facilities through prior written permission.

A Firearms and Weapons Defense Attorney knows that the Las Vegas Metropolitan Police Department is the agency in charge of processing concealed weapon applications (CCW). The process includes taking a photograph and fingerprints of the applicants as well as running a complete background check. Prior to approval, the applicant must show that:

There are several reasons why an applicant may not be eligible to receive a CCW permit. These include:

There are several activities that Nevada law prohibits regarding weapons and firearms. Some of these include the possession of, manufacture of, importing of, and use of silencers and particular types of weapons. These can include knives built into a belt buckle, switchblade knives that are over 2 inches in length, slingshots, billy-clubs, and brass knuckles, just to name a few. A Firearms and Weapons Defense Attorney can review all the charges that have been brought against you and verify that they are indeed applicable to your situation.

Gun and Weapon Offenses are severe offenses that must be taken seriously. Being convicted of Gun and Weapon charges can have long-lasting effects including prison time, hefty fines, and if you are an immigrant, it could result in you being deported.

Even getting a misdemeanor conviction can include a six-month jail sentence along with a $1,000 fine. A felony conviction carries a one year to a life prison term with fines in the $10,000 range depending on the type of charge.

A firearm or weapon conviction can stain your record and cause many other challenges in your life for many years. This includes the loss of future job opportunities, your opportunity to enlist in the military, being able to receive college financial aid, having the right to vote, and being able to ever own a firearm. Las Vegas criminal defense attorney Gary L Guymon knows the laws pertaining to weapons and firearms and can help you through a troubling time in your life when you have been arrested on Nevada Gun and Weapon Offenses.

If you have been arrested on Firearms and Weapons charges in Las Vegas, Henderson, or anywhere else in Clark County, you owe it to yourself to contact Las Vegas Criminal Attorney Gary L Guymon to schedule a free, no-obligation consultation to review your case where he will use his extensive knowledge and experience to help you win your case. Contact Experienced Las Vegas Firearms and Weapons Defense Attorney Gary L Guymon today.