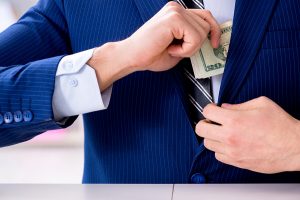 Embezzlement is a criminal law violation that is actually a form of theft. It differs from the subset crime of larceny in that the perpetrator is typically assigned authority in a fiduciary relationship to access the property that is purportedly missing. The criminal law classification is divided based on the amount of funds that may or may not have been taken, but it still is nonetheless a charge that will require representation from embezzlement defense attorneys who are licensed to practice in Nevada. Having an attorney is essential because the sentencing can actually include incarceration for up to six months in a local jail even for a misdemeanor conviction. Anyone who is potentially facing jail time due to a criminal charge is required by law to have “adequate” legal counsel, which can include a public defender when the defendant qualifies in the view of the court. However, this rarely bodes well even in a misdemeanor case. This possibility is why it is always best to have a private lawyer like Las Vegas embezzlement defense attorneys Gary Guymon in Las Vegas NV representing the case for an acceptable outcome.

Potential Penalties Upon Conviction of Embezzlement

Embezzlement criminal classes are both misdemeanor and felony, and they are determined by the value of the property that is in question. Typically, the property is money in some form, but not always. Cases involving values of $650 or less are misdemeanors and can result in six months of local incarceration with a maximum fine of $1000. In addition, restitution is usually requested and ordered by the judge according to court determination. Cases involving between $650 and $3500 are filed as Class C felonies, and a conviction can result in a jail term of up to five years in a state facility along with a $5000 fine.

What Experienced Embezzlement Defense Attorneys Can Do

It is a requirement of the state of Nevada to prove several aspects of an embezzlement charge when bringing a case against an accused individual. They must first prove that the defendant’s actions were intentional when they had taken ownership of the property. The defense that the defendant had acquired the property through the relationship can also be a solid argument submitted by a defense lawyer when it can be established as a material fact in building reasonable doubt. Focusing on reasonable doubt is exactly what embezzlement defense attorney Gary Guymon will do when addressing the court or negotiating a case settlement. Reasonable doubt is the burden of proof defense standard in Nevada just as anywhere else in the nation, and it is how all experienced defense attorneys win cases for their clients who may have been frivolously charged with a law violation.

Never assume that there is no defense to the charges when being accused of embezzlement in Nevada. The attorney that is chosen to represent the case matters greatly. A conviction on embezzlement charges is a very serious problem for any defendant, and it can impact the future as well as freedom and lost financial resources due to fines and restitution orders. This is not to mention generating a criminal history for those with a clean past. Always contact Gary Guymon in Las Vegas NV for aggressive professional legal representation.